Who Are LVP Renewables?

Who Are LVP Renewables? 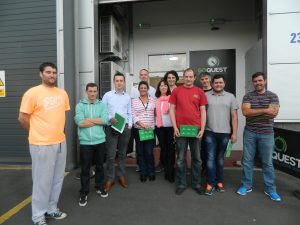 LVP Renewables are the Specialists in Solar Panels with installations across Ireland. They’re a dedicated team bringing this cost-saving and green technology to thousands of homes around the country, aiming to not only meet but exceed your expectations when it comes to providing piping hot water all year round.

But who are they really? Well let’s take a look at the history of LVP.

The story goes back to 1974 when Jeff White debuted the company as Leisure Vehicles and Products. It’s all in the name, with the company specialising in vans with every mod con you can think of.

In 1980, LVP Conveyors was created and this company went on to supply mechanical handling solutions to major business in Ireland. Their work included the providing the conveyor systems for Terminal 1 at Dublin Airport in a landmark deal.

A number of years later, Jeff was introduced to Thermodynamic Solar Panels from Portugal. As a test case, he bought a number of the panels for his family homes in Ireland, while continuing with the everyday work at LVP.

After witnessing the results of the panels first hand, the company acquired the rights to the Energie Thermodynamic Panel in Ireland in a move which Jeff credits as “one of the best decisions that I have made in 35 years of business.”

At this time, Jeff’s son Richard White enters the frame and, seeing the potential of the system, comes on board full time to sell this new technology. With that, LVP Renewables is born.

Since then, the company has grown to 13 full time employees with a half dozen contractors. LVP also works hand in hand with several main distributors across Ireland, bringing local service to homes in all parts of the country.

LVP’s products have featured on About the House on RTE and Ireland AM on TV3 and the company has been a finalist at the Green Energy Awards.

To find out more about the real world savings possible with Thermodynamic technology visit the LVP site or call 018643838.